D R O N E is the bank vault in the basement of 1 Hudson. Email gryphonrue@gmail.com for event announcements. 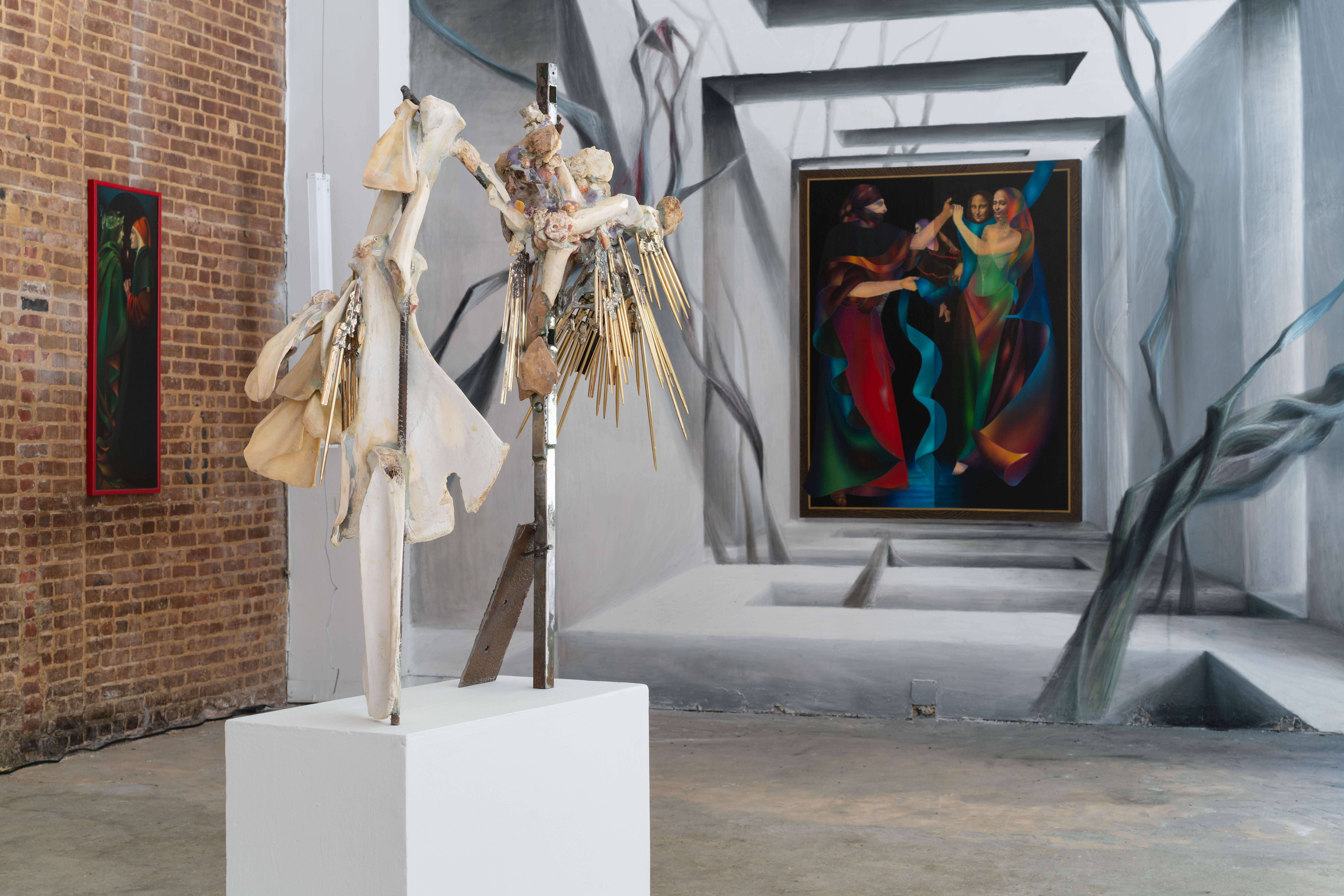 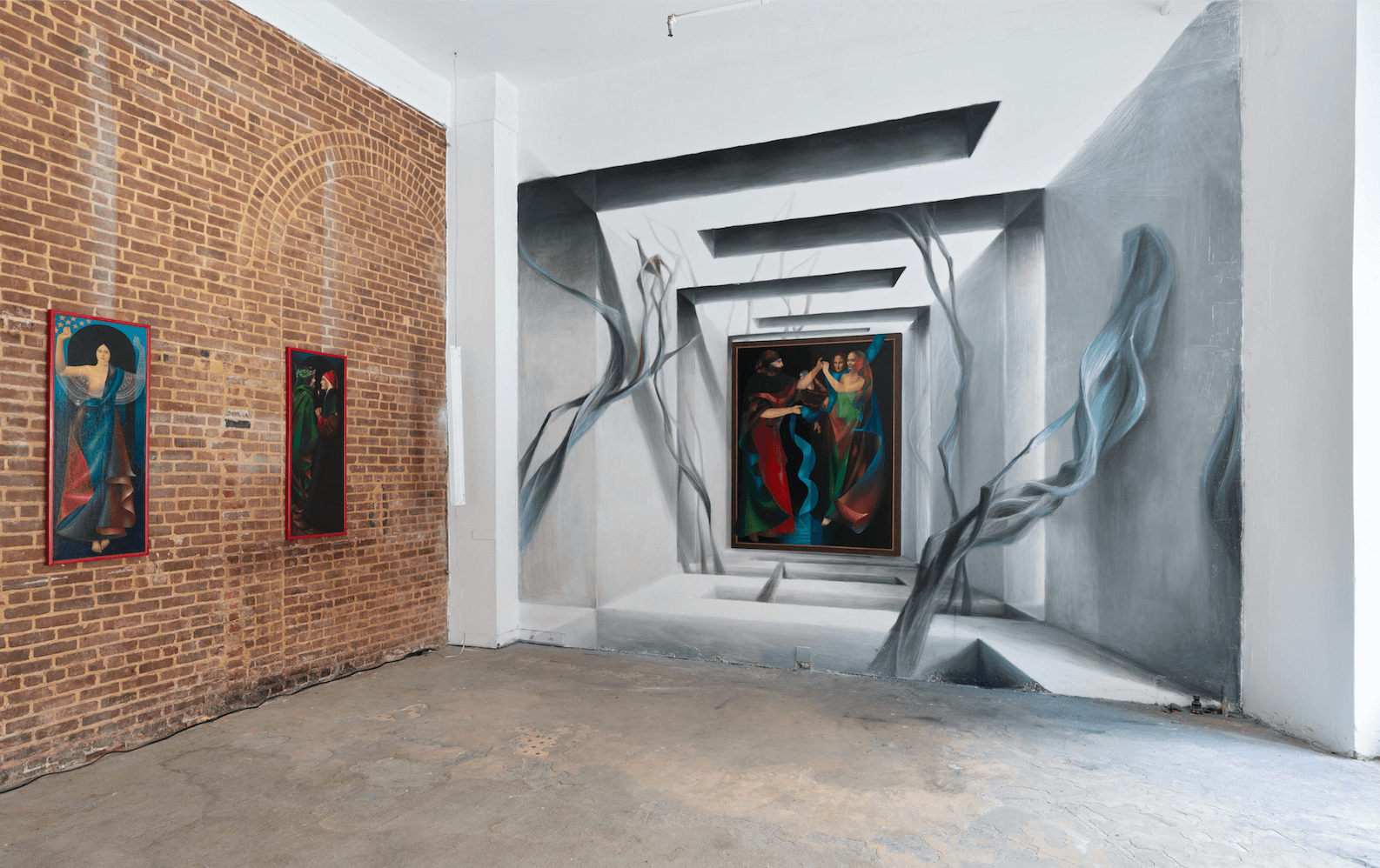 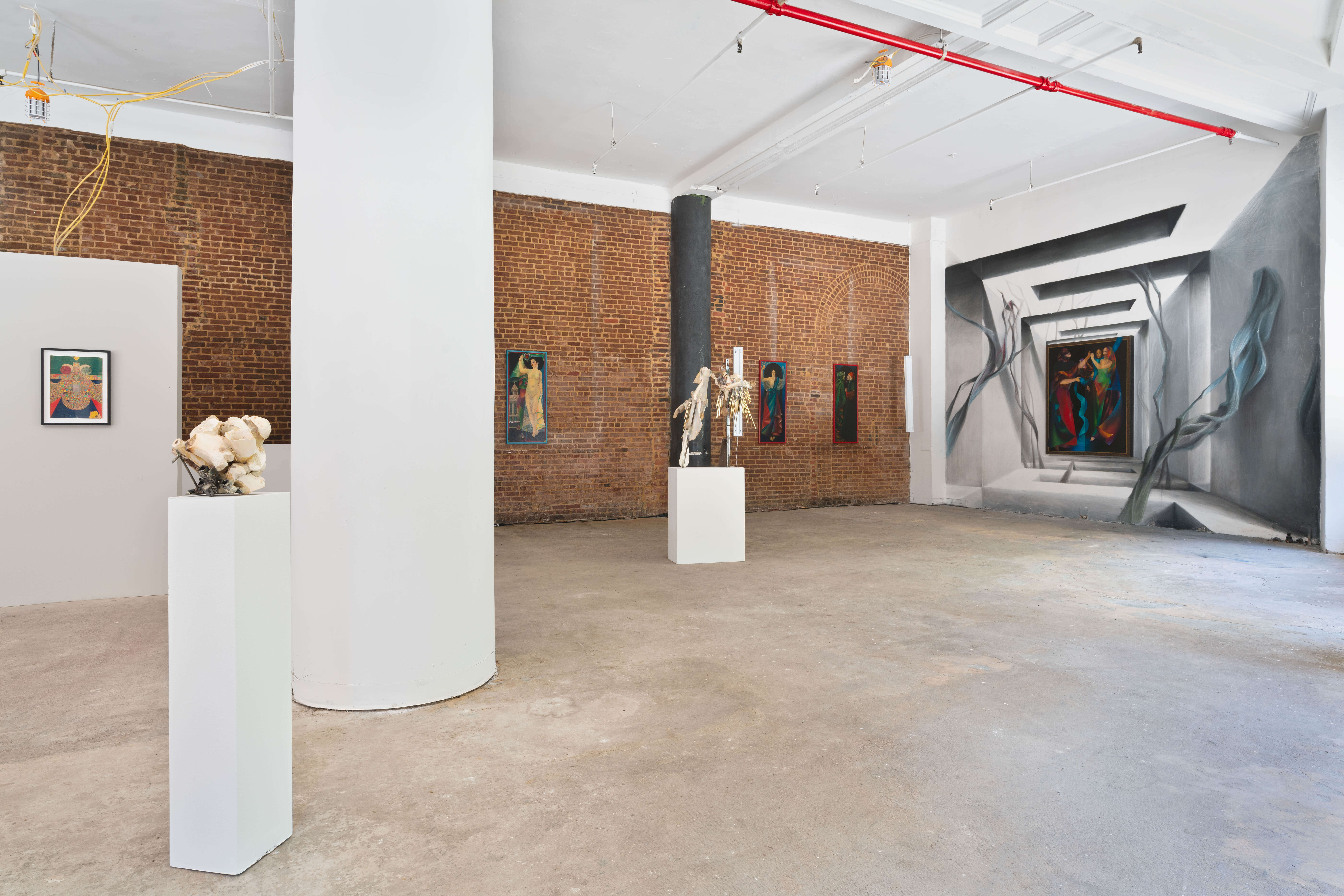 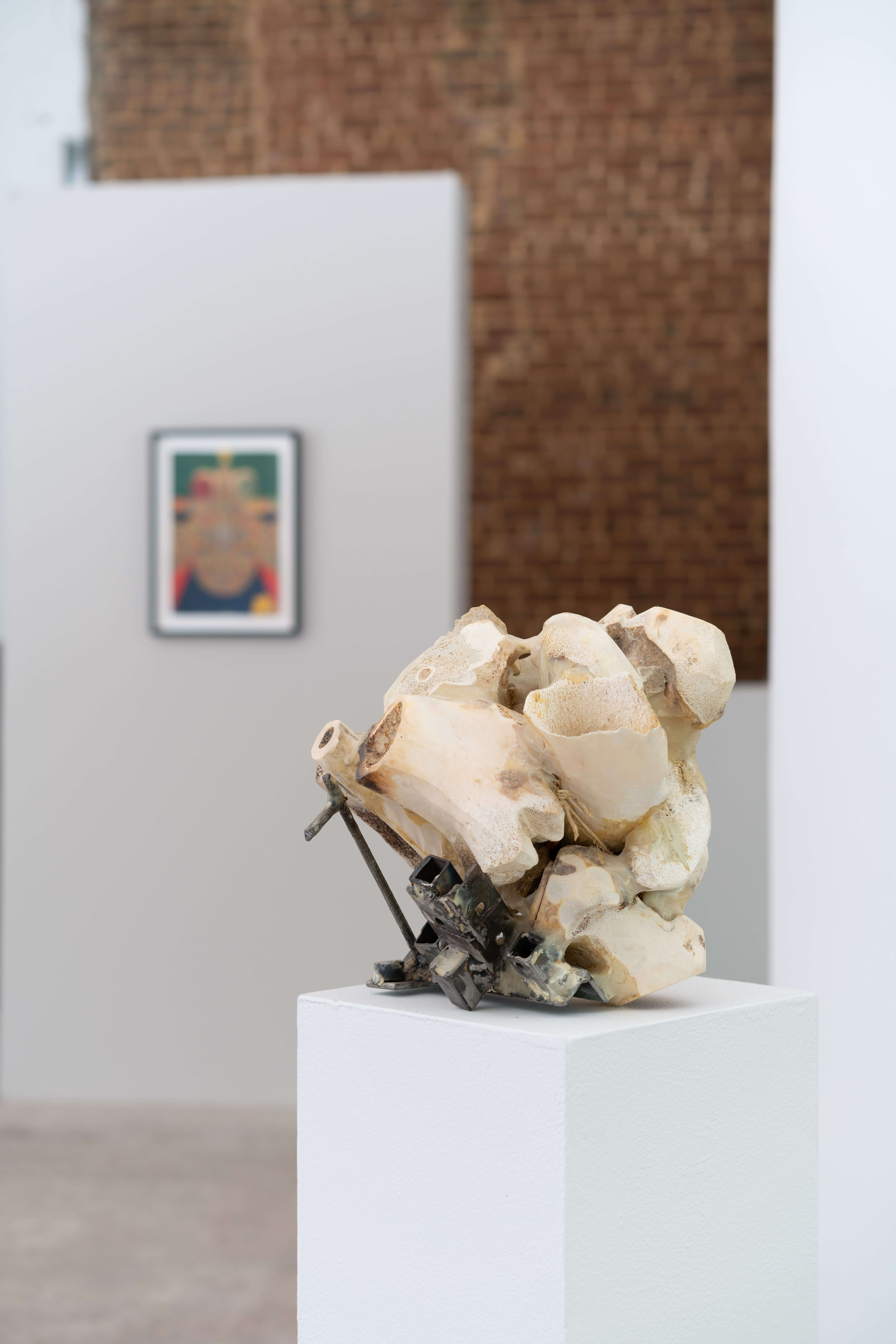 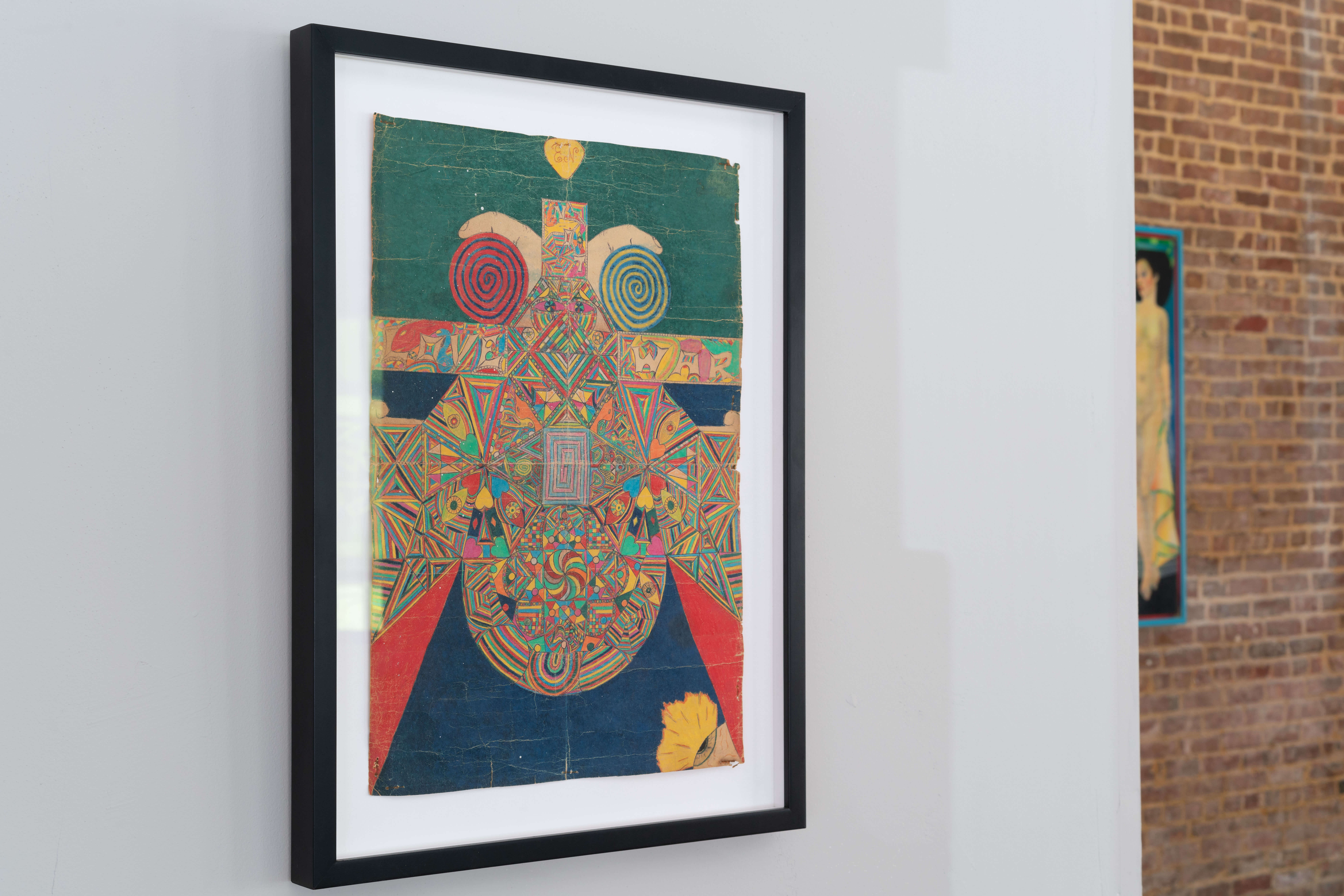 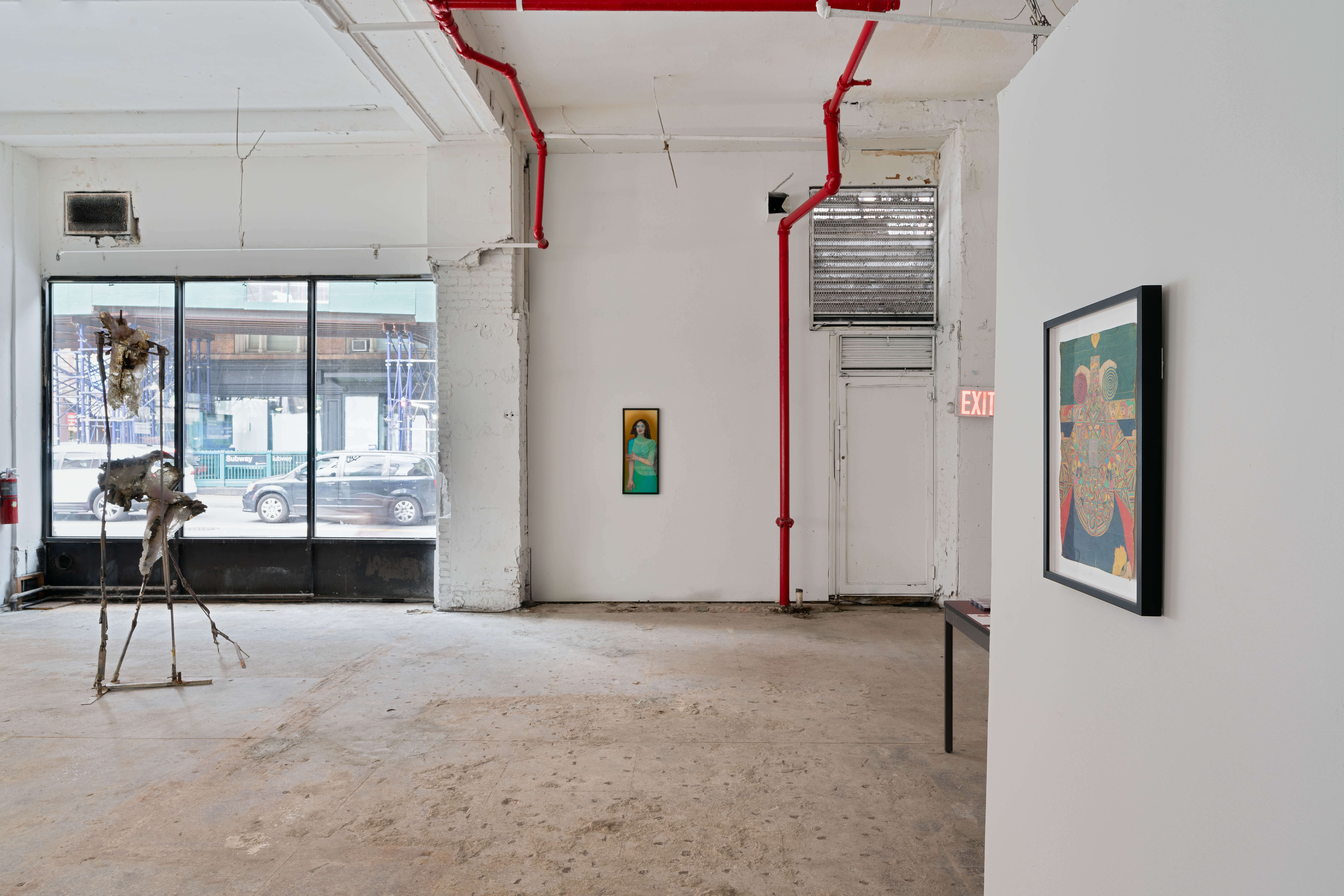 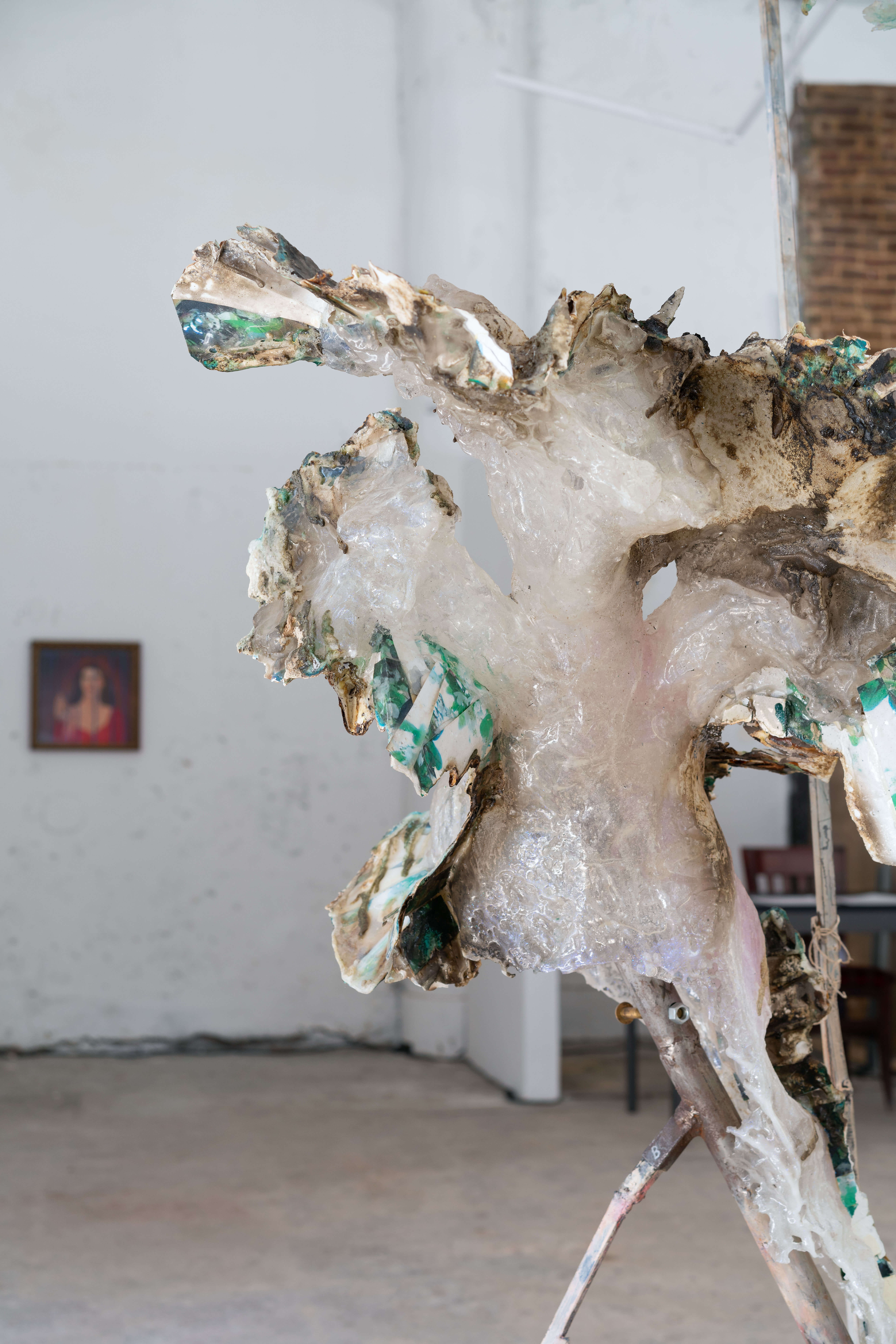 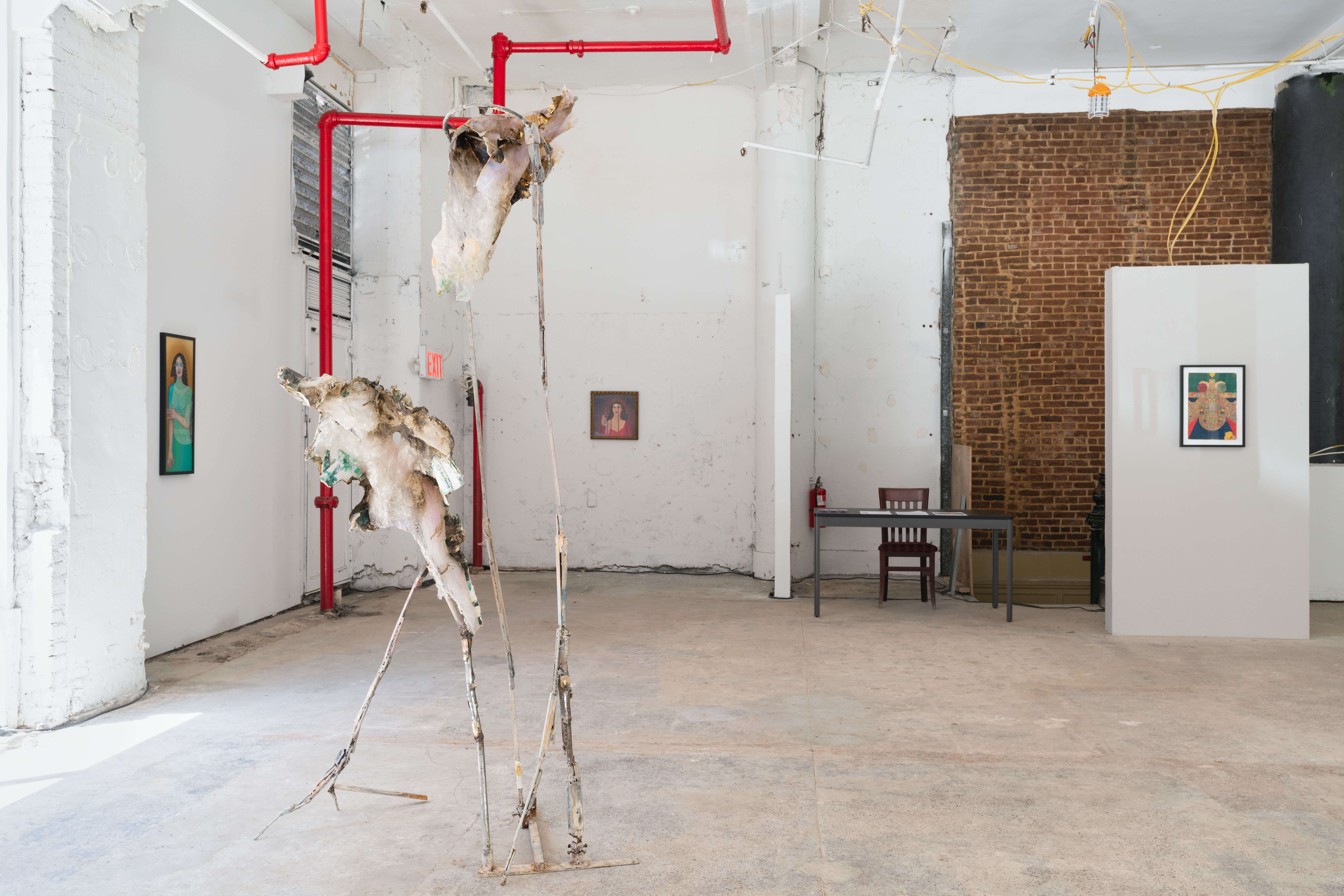 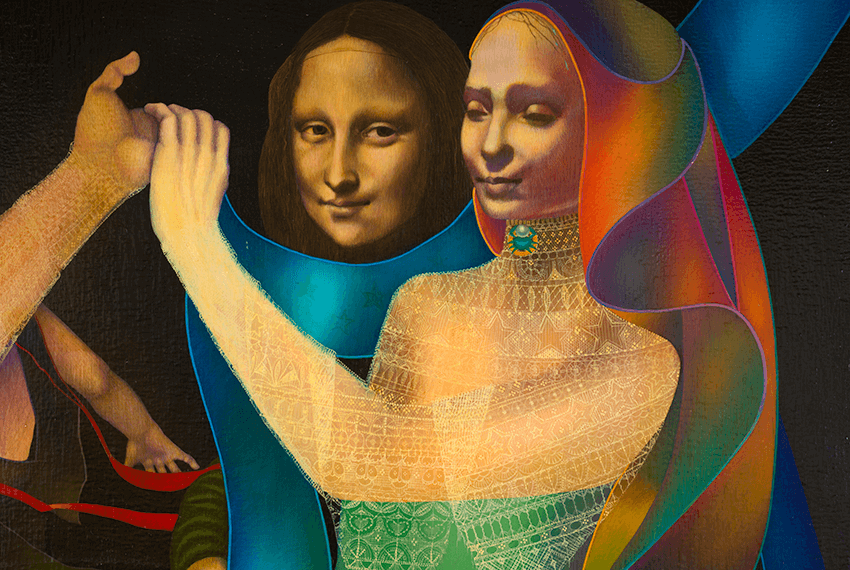 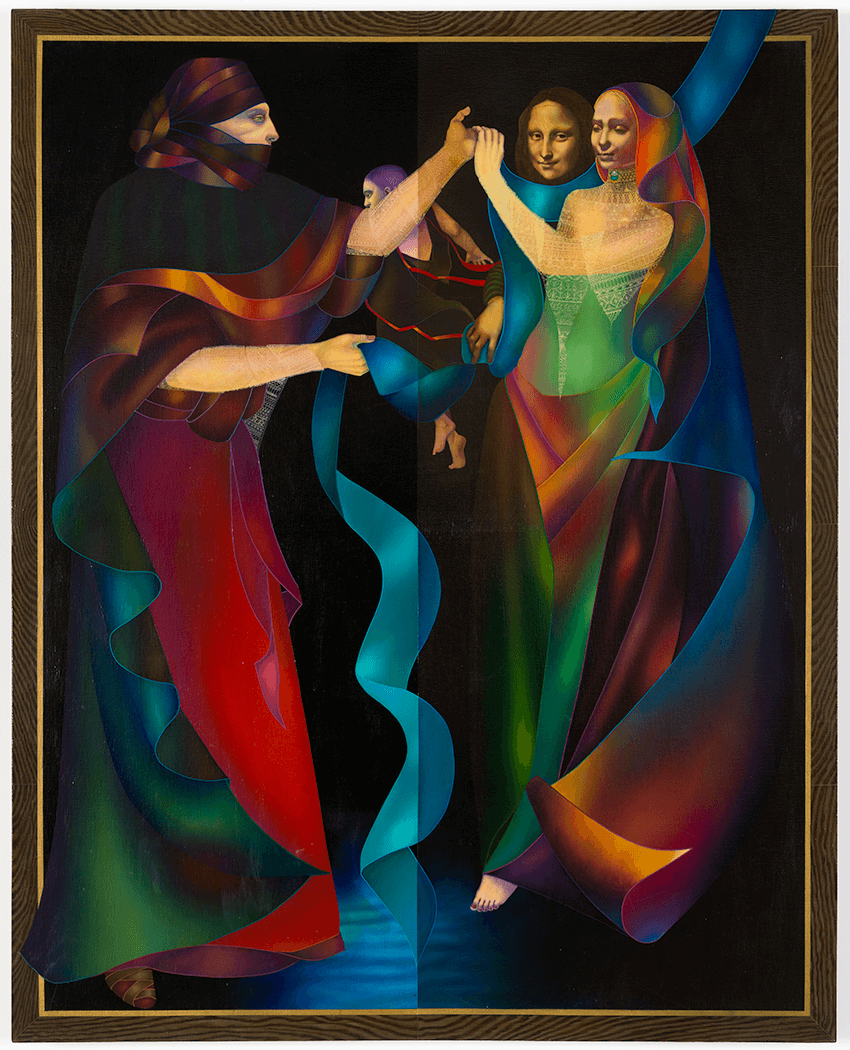 < >
The Location of Serenity 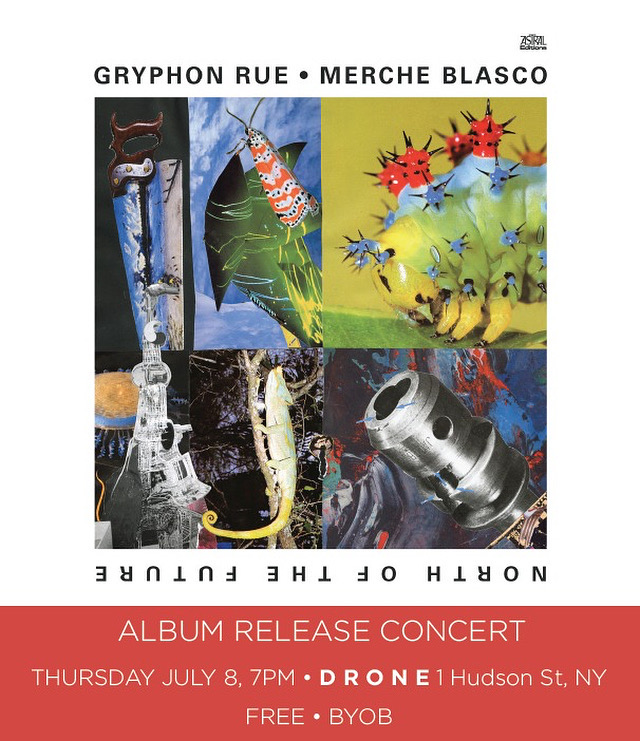 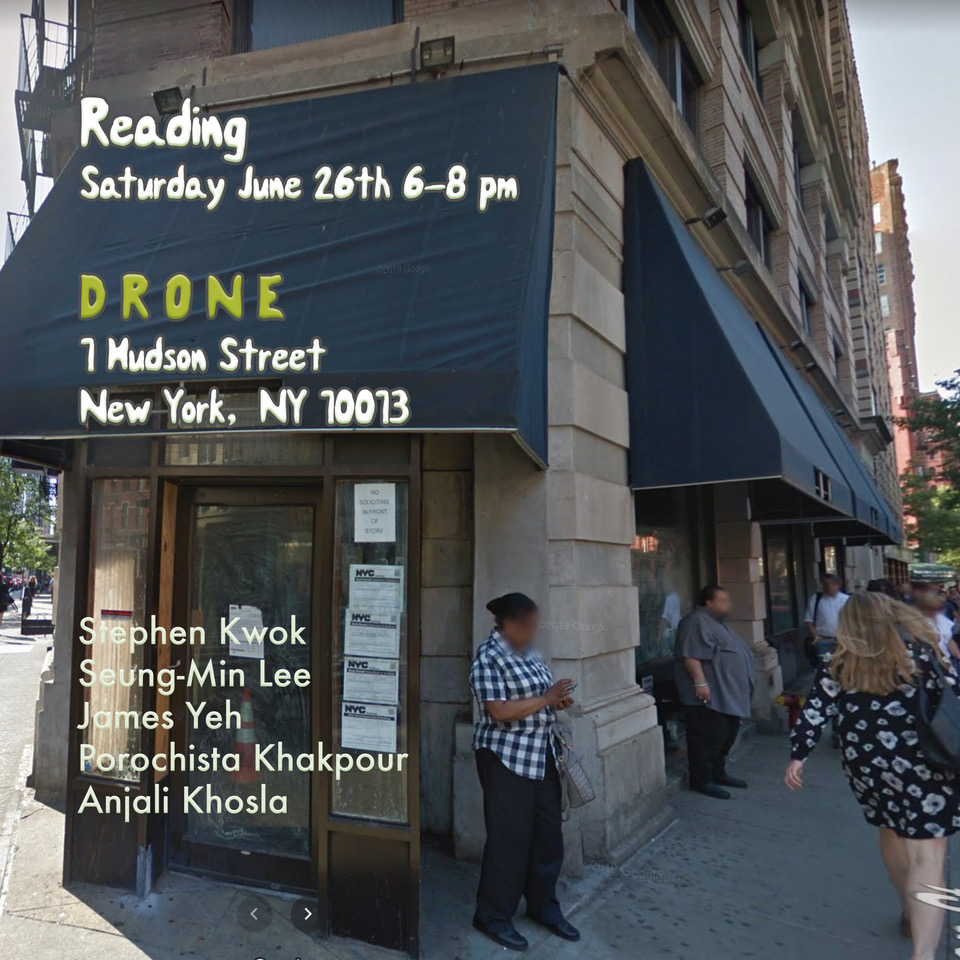 “For beauty is nothing but the beginning of terror […] because it serenely disdains to destroy us.” Rilke

“When our time ends on its rictus smile, we’ll pass the lure of fortune.” Dune

D R O N E is pleased to present its inaugural exhibition, The Location of Serenity, exploring the surreal and sardonic climate of death and immanent regrowth. Bringing together four New York-based artists, The Location of Serenity draws from recent memory to propose spiritual enrichment and mystery as tonics to pervasive loss. Death, the plague, disruptions of systems are in our face, permeating our lives, saturating the periphery. And yet, interior states of serenity bear external signs – a smile, a gesture, a vibe eluding the quantified actualities of the external world.

Various questions drift in the air: must a location be a physical place? Can serenity bear internal contradiction? Does ambivalence disrupt serenity’s location?

How do I find this Location of Serenity?

In the 1970’s–1990’s Elsa Rensaa produced a small body of icon paintings, portals summoning a luscious brilliancy through a meticulous process of thin acrylic washes. Rensaa’s paintings are a catholic mix of symbols, syncretic visions derived from Ancient Nordic, Egyptian, Eastern, and Lower East Side iconography, channeled through an evident veneration for Renaissance painters, evoking the fabrics of Pontormo and the portraiture of Bronzino. Friends are wryly portrayed in historical garb, such as Untitled (Clayton and Gunner, ca. 1990’s) where her husband stands regally with the couple’s dog.

Rensaa’s largest painting Untitled (Mona Lisa and L’inconnue de La Seine, 1980-1981) depicts Mona Lisa peering from the billowing wimple of a young woman resembling L’inconnue de La Seine, the death-mask putatively cast from the face of a woman who drowned in the Seine in the late-1800’s. Vladimir Nabokov, Rainer Maria Rilke, Albert Camus, Anaïs Nin, Man Ray and others were bewitched by the woman’s expression – mordant amusement at the expense of the living? deep satisfaction? At some point in the 1970’s, Rensaa compared the smiles of Mona Lisa and L’inconnue de La Seine speculatively with the risus sardonicus or rictus grin, a muscular disorder caused by poisoning which appears to produce grinning. Perhaps here we can locate a dark, unstable idea of serenity.

In a mysterious allegory, the former New York City Police Headquarters (240 Centre St) stands in the background of Untitled (Chinese Goddess, ca. 1980’s). Graffiti, a rat with an Egyptian amulet, a weeping candle, codes of gritty resistance wrought from Rensaa’s life boldly contrast with the richly detailed lace swathing the nude body of a Chinese goddess, her face painted with enchanting feathered strokes. The rat clutches an amulet of Khepri, the Egyptian scarab god rolling a pearl of dung, a symbol placed in nearly all of Rensaa’s paintings. Notice the tiny pyramids at the bottom of Rensaa’s Dick and Dante (ca. 1980’s) hurling the figures into scale. The enormous beings tête-à-tête in a celestial realm emanate vaporous fabrics and dwarf the dunes in the pall of night. In a smaller painting Untitled (Missing finger, ca. 1980’s), an implacable girl in a sea-green dress shows her freshly cut finger, perhaps severed by the apparition in her back, a big brown bird with a powerful beak for cracking seeds. Wings of white lace emerge from the girl’s hosting body.

Viktor Timofeev contributes a site-specific mural in response to one of Rensaa’s paintings. The pastel mural functions like a theatrical stage set for Rensaa’s work, framing and building upon its supernatural qualities. Timofeev’s labyrinthine “set” is populated by several organic protrusions escaping through the corridor’s angular crevices. Their bulbous limbs twist and intertwine, mirroring the folded fabric and elaborate ribbons in Rensaa’s painting. The outgrowths possess an anthropomorphic quality as they stretch towards one another scaling the perimeter of the corridor, calling to mind a body that has outgrown its shell or a plant inching towards a more promising life source.

Yasue Maetake’s three table-top to human-sized sculptures are constructed with various metals, resin, and animal bones. The works suggest that a realm exists beyond questions of mass annihilation, sharply distinct from the afterlife promised or implied by many religions. Optical traces of Gothic and baroque edifices hint at this metaphysical reality, as their taxidermic constructions inhabit unsettling states of bodily indeterminism and material flux. These constructions are born from Maetake’s “blurred reproductive memories of figurative objects or events combined with figments of my imagination.”

Eddie Natal comments on his untitled drawing (ca. 1990’s). “I was just trying to draw my own kaleidoscope. When I was a kid my father used to deliver groceries to Peter Max. He gave my dad a couple of his drawings. That was before he became famous. I think at the time I traded two pieces of my work with Clayton Patterson for a magnifying glass lamp, which I still have. I did a lot of locksmith work for Clayton. I love both him and Elsa so dearly.”

ELSA RENSAA (Cancer, b. 1944, Oslo, Norway) studied at the Montreal Museum of Fine Arts, Alberta College of Art, and Nova Scotia College of Art and Design. Rensaa was an art director and four-color stripper at the largest commercial printing company in Western Canada in Edmonton, Alberta. In 1972 Rensaa began living with the artist, activist, and documentarian Clayton Patterson (1948-). The couple moved to New York in 1979, where Rensaa resumed working in fine art printing, eventually as a chromist reproducing paintings by Pablo Picasso, Salvador Dalí, and others as print editions. Rensaa and Patterson became activist-documentarians of the Lower East Side, and their lives were defined by violent political periods in the 1980’s and 1990’s. Rensaa developed an archival system for their activities and assisted Patterson’s rebellious video documentation of police brutality, including hugely consequential footage of the August 6-7, 1988 Tompkins Square Park police riot (see Captured, directed by Daniel Levin and Ben Solomon). In 1986 Rensaa and Patterson created CLAYTON Caps, for which Rensaa executed elaborate customized embroideries, innovating the fashion of the baseball cap. Rensaa, a licensed tattoo artist and vice-president of the Tattoo Society of New York, ensured proper sterilization procedures at the NY International Tattoo Convention under the supervision of the NYC Health Department. Rensaa has previously limited exhibitions, always exhibiting with her husband in New York art spaces including Howl! Arts, Galerie Au Bon Punk, and Clayton Gallery & Outlaw Art Museum.

YASUE MAETAKE (Virgo, b. 1973, Tokyo, Japan) studied glass art in Japan and the Czech Republic before moving to New York. Her exhibitions include 2008 Sonsbeek in the Netherlands, and more recently, at the 58th Venice Biennale at the Palazzo Benzon in 2019, and at Microscope Gallery in New York, 2021. Other exhibitions include at Galerie Fons Welters, Amsterdam, Netherlands; Espacio 1414, The Berezdivin Collection, San Juan, Puerto Rico; Queens Art Museum, NY; Fredric Snitzer, Miami, FL; The Chimney, NY among many others. Maetake was a recipient of an artist residency in the studio of El Anatsui in Ghana with a research grant from the Agency for Japanese Cultural Affairs.

VIKTOR TIMOFEEV (Scorpio, b. 1984, Riga, Latvia) is an artist currently living and working in New York. Timofeev has recently had solo exhibitions at Interstate Projects in New York, Karlin Studios in Prague, kim? Contemporary Art Center in Riga, and Alyssa Davis Gallery in New York. Group exhibitions include The Latvian National Museum of Art in Riga, Den Frie in Copenhagen, Stroom Den Haag in The Hague, and Bozar in Brussels. Upcoming exhibitions include the Ludwig Museum in Budapest and the 14th Baltic Triennial in Vilnius.

EDDIE NATAL (Taurus, b. 1950, Levittown, Puerto Rico) lived in New York for many years, where he became friends with the Lower East Side artists Elsa Rensaa and Clayton Patterson, who collected Natal’s drawings, doodles, and musical scores. Natal studied at New York School of Locksmithing and Alarms and worked at DW Locksmith and Hardware in Harlem. He has an Associate of Arts degree from Boricua College, and currently lives in Toa Baja, Puerto Rico.